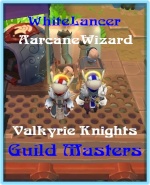 This test has no time limits as to how many attempts can be made in any given time or how soon after becoming a recruit the test can be taken. Also, failure of this test will in no way constitute dismissal from the Guild.

The test for promotion from MEMBER to VETERAN is to be the "GAUNTLET" from the missions menu with 1 guild mates help (Veteran rank or better), no death. You cannot do both test on the same day.There will be a wait before you can take the test for VETERAN of 1 week.

"A Valkyrie Knight must have one of the following helms to be use at Guild meetings/group photo's and such." This will be required for Member rank and above. Recruits are encouraged to get one to qualify for promotion to member BEFORE the member test.

Update:
On 02/24/12 the following helms were added to the list of helms that are acceptable to fill the requirement for promotion to member.

Heavenly Iron Helm Helm. - 5*
Any Helm that has had the Halo Accessory added to it.

With this said on behalf of the Guild, we bid you "Good Luck", fair knight...

(In addition to the above rules, you must be registered at this forum and have read the rules above. A "no brainer" I know, but you'd be amazed at the people that want to take the test without knowing/reading the test perimeters.)

As always, this doc is submitted before approval is granted and changes can/will be made at any time as seen fit by the officers.